You’re thinking about picking up a summer sport in the ocean and you can’t decide if you’d like to try bodyboarding or surfing.

Or perhaps your kids are getting a little older and you’d like to introduce them to either of these sports but can’t decide which would suit them better?

Bodyboarding or surfing for beginners are both very doable but let’s explore some factors to help you make this decision.

Bodyboarding and surfing should not be taken up until you are a competent swimmer.

If you are, the first basis of your decision of whether you should pick up bodyboarding or surfing is looking at your overall level of sporting ability and coordination.

Bodyboarding is an easier sport to pick up and master than surfing.

If you are one of those people that are general all-rounders when it comes to sports, you may like to give surfing a go.

If you’re not an overly sporty person or perhaps you’re less coordinated, surfing will prove to be very difficult. I fall in this camp and I found surfing almost impossible.

If you’re not that sporty but would like to try surfing anyway, go for it! Just be prepared that you have to work quite hard to catch a wave but don’t be disheartened!

I think I wasn’t mentally prepared with how hard it was to learn as the locals on the Gold Coast in Australia sure made it look easy!

Surfing for kids is best started at surf school. Surfing is quite a technical sport so its advisable they get into good habits from the beginning. Just let them know it can be a bit tricky so they don’t get frustrated too easily. Practise makes perfect!

Bodyboarding Is Easier Than Surfing

Bodyboarding is safer to learn than surfing which makes the sport easier to learn. Here’s why:

There has always been a rivalry between bodyboarders and surfers as they attempt to outdo each other. This rivalry is such a waste of time as they are simply 2 different sports. Bodyboarders are able to do some things that surfers can’t and vice versa.

If you’re a bit of an adrenalin junkie and think bodyboarding may not be for you, think again. Laying down on a bodyboard allows you to experience moves that are different to surfers and you may be pleasantly surprised! Here are some points to debunk the fact that bodyboarding is boring.

I’m sure some of you are thinking, puuhleeasee….. there is no way you’d get more of an adrenalin rush than being able to catch those absolutely massive waves. Well, of course not!

However, I doubt you’d be reading this if you’re thinking of heading out to Nazaré! This is for common folk, the mere mortals that do actually have to think twice before hitting those 6 footers in those early stages of bodyboarding.

The Practical Side of Bodyboarding

From a practical point of view, bodyboarding is also cheaper and easier to organise than surfing. Particularly useful if you’re a growing family and you’re on a bit of a budget. Here are some of the advantages:

Great Introduction to the Surf

If you’re a true beginner and you’re not familiar with the surf, bodyboarding may be a good place to start first before you try surfing.

Bodyboarding is a gentle way to introduce young kids and not so experienced surf goers to the ocean. A good mix of play, sport and learning about the water. It will help you learn about the surf conditions.

It’s also a great way to learn how to manoeuvre in the surf. Understanding when the waves will break, how it peaks and learning about timing. Once you become more comfortable in the bigger waves, you could move onto surfing.

What is the difference between boogie boarding and bodyboarding?

In early 1970’s, Tom Morey wanted to find a new way for people to enjoy the surf and he invented the first bodyboard. He named it the Morey boogie which eventually became the boogie board.

It is said that boogie boarding is perhaps for those who are less serious about the sport and is only mainly for leisure. The term bodyboarding denotes a more serious connotation. To be fair, in Australia we call it boogie boarding, irrelevant of how serious one takes the sport.

So boogie boarding and bodyboarding are essentially the same thing. Tom Morey, we are forever in your debt as you’ve allowed everyday families to enjoy the ocean they otherwise may have been able to.

Is surfing more expensive than bodyboarding?

Apart from the hardware, costs may also be incurred if you’re going to be taking lessons. Surfing is a very difficult sport to learn on your own so some lessons to ensure bad habits aren’t formed should be taken. You don’t require lessons for bodyboarding when you’re starting out.

Why is there a rivalry between surfers and bodyboarders?

There is much conjecture about how the true rivalry between surfers and bodyboarders started.

Before bodyboards were commercialised, surfers were somewhat revered for their surfing abilities. There were only an elite few who truly ever made it and because it is such a difficult sport, people could only ever watch from afar and admire them. This status is somewhat addictive and they became accustomed to having this cult following.

Along comes Tom Morey and he invents the boogie board. This enabled people to enjoy the surf without the difficulty of learning to catch a wave standing upright. All of a sudden, people who would never dream of ever catching a wave, now can. The surf no longer became the sole domain of the surfers anymore. Perhaps they weren’t as revered as they used to be, all the while also having to learn to share their haven with others.

This rivalry has diminished over time and frankly, bodyboarding has evolved so much that no one should be competing for superiority.

Do I need to know how to swim for bodyboarding and surfing?

Absolutely. If you’re going to engage in a sport that’s in the ocean, you should be able to swim.

Apart from safety reasons, you need to be able to paddle for both sports and you need to have good kicking technique for bodyboarding to give you the propulsion you need to catch the waves.

Is bodyboarding a good workout?

Most definitely! Bodyboarding a great water sport that provides you with an all body workout. Apart from a good workout just from paddling, kicking and having to balance and steer, battling oncoming waves to get past the breakers is hard work enough!

The best part of all however is that you don’t even realise it. It’s not until you stop and you strip off and get home do you realise what a massive day you’ve just had!

Bodyboarding or surfing for beginners are both fantastic options for being outdoors and adopting a new passion.

I know that we always look forward to our long weekends away where we’re spending long days on the beach and in the water. I know my family has had a good day when we’re in bed by 8pm from the sheer exertion of the day’s activities!

If you are however adamant on trying surfing first, here are some sage advice from Surfer Dad on how to teach your kids to surf.

We would love to know which sport you decided to try and how you went. Or if anyone else has further insight, comment below to help these beginners make a decision.

18 thoughts on “Bodyboarding or Surfing for Beginners?”

This site uses Akismet to reduce spam. Learn how your comment data is processed. 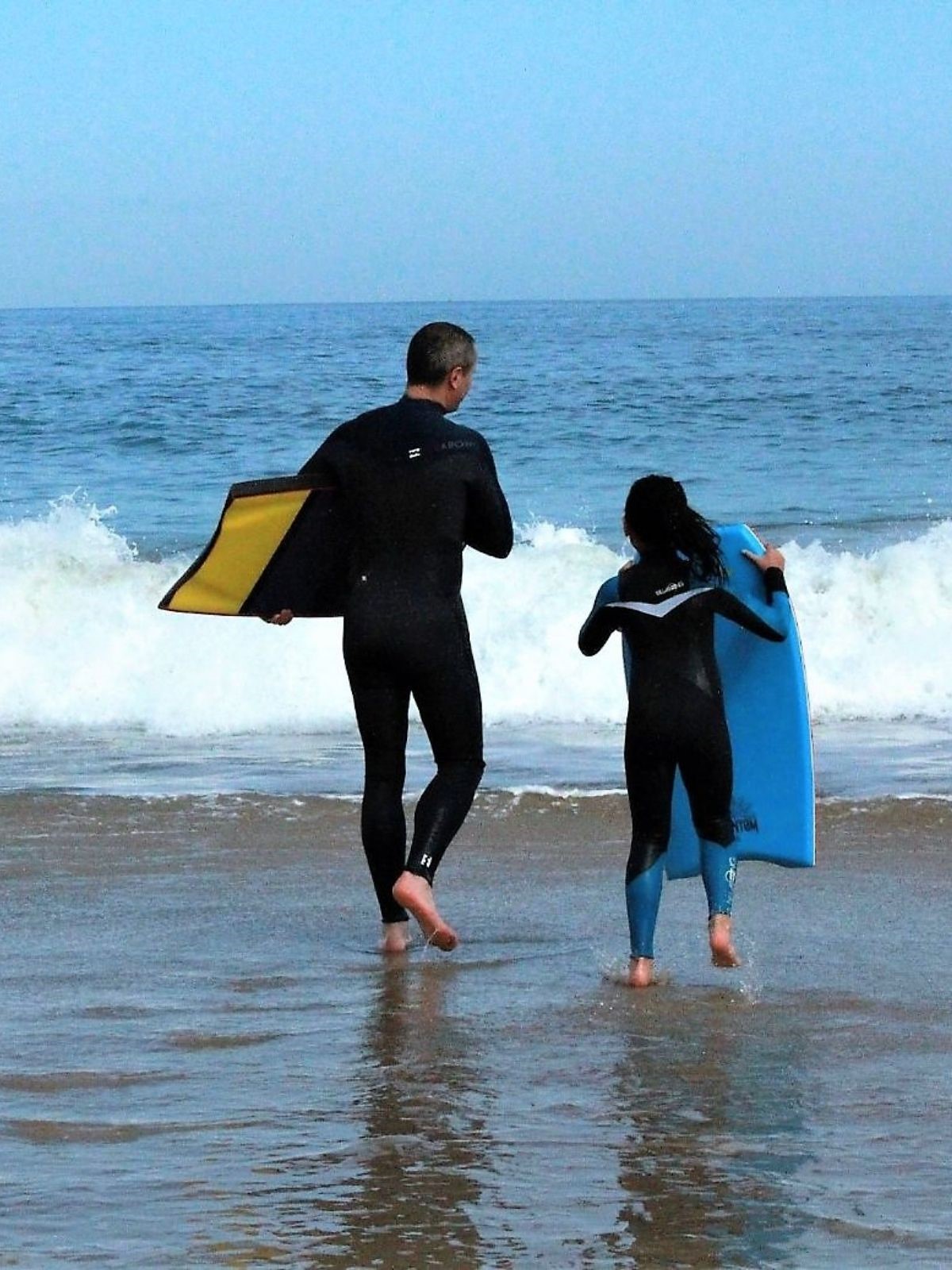 Useful and practical tips about how to make the most out of your bodyboarding adventures. 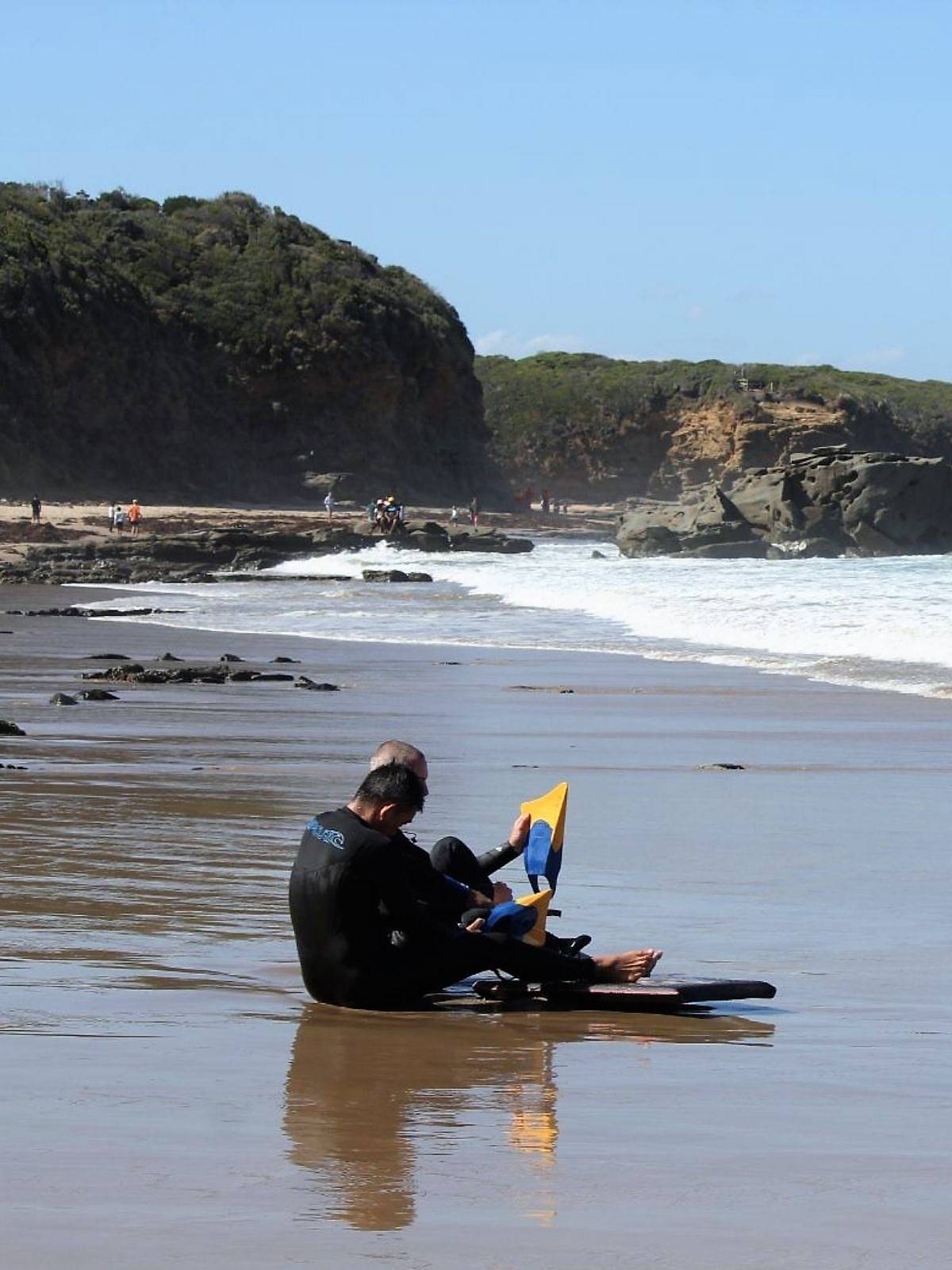 Everything you need you know about wetsuits, bodyboards, fins and many other bodyboarding accessories.